Jake Ash, head coach of football at Penryn College, and with a busy day job as our Study Support Programme Manager, is better known outside school as the extremely successful former captain of Truro City Football Club who started his career at Falmouth Town.  His success, passion for the game and commitment to coaching make him an inspiration for many of our young players.  We caught up with him to find out our teams are faring this term. 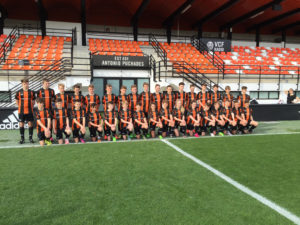 2016 Football tour to Spain – a visit to Valencia FC inspiring our players!

‘This term we’ve entered teams for the ESFA National Cup – a great knockout tournament which pitches our teams up against some really competitive schools.  Year 8s, 9s, 10s and 11s all got through to the 4th round – our best ever collective performance. This is top level, challenging schools football for our boys and it gives them really valuable experience as teams and as individuals. Our best ever success in the Cup was 2012 when the Year 11 team got to Round 7, which was the last 16 out of 792 teams entered nationally.  In 2015, the Year 9s got through to the last 64 out of the near 1000 schools and into the 6th round.

The ESFA National Cup has energised football at Penryn. It’s a prestigous goal for the players to work towards, with the best teams getting a chance to play the final at a Premier League Club venue.  This season, to date, both the Y8s and Y10s have now been knocked out by very good sides from Devonport High School for Boys in Round 4.

However, Y9s beat Plymstock last week and now face Paignton in Round 5, putting them in the last 64 of the competition! Penryn’s goal came from Liam Morris, and an outstanding performance by the defence, and in particular Billy Daly, ensured Plymstock couldn’t peg the goal back. Not to be outdone, the Y11s also reached Round 5 after beating Devonport 3-1 with a stunning display of football. Goals from Kian Thomas, Toby Webb and Arran Wright ensured the boys will face a tricky tie at Ivybridge in the last 64.

Football in the Autumn Term has no training schedule or curriculum time  – the boys just have to turn up and play. They are drawing on last term’s training and playing together  – their progress is even more impressive if you take that into account.  The teams have to be prepared to travel further afield to play matches against teams all over the South West. It’s a very different experience from the familiarity of our local School Sport League fixtures.’

A reminder that the school will be closed to students on Monday 28 November for a Staff Training Day. 📅

👩‍🚒👨‍⚕️ A BIG thank you to the many employers, education providers, pupils and parents/carers who came along to last night’s fantastic Year 9 Careers Fair!

We hope our students left feeling inspired and full of ideas for the future! ✨

A big thank you also to our Careers team. 😊

🎻 The fantastic Chapel Street String Quartet performed some amazing pieces of music for our ARB pupils and a group of our Year 8 students last week.

Pupils enjoyed listening and responding to the music, and were even able to conduct!

In this week's 𝐒𝐭𝐮𝐝𝐞𝐧𝐭 𝐒𝐩𝐨𝐭𝐥𝐢𝐠𝐡𝐭... Year 10 pupils Ben and Lily, who were part of a team that finished first in the recent 'Born to Perform' National Dance Competition in Swansea! 🕺💃

A reminder that the school will be closed to students on Monday 28 November for a Staff Training Day.