Our journey to the 2016 English School Cross Country Championship started a few weeks ago, on a cold January day in Newquay when Penryn College put Floyd Radcliffe and myself forward for the Intermediate Boys Race. I thought I had my best race and managed to finish in 6th place, with Floyd finishing 8th place, both of us beating fellow friends. This was the longest distance we’d ever ran and we both found it difficult with many muddy patches and numerous hills to run up, however I felt the hills helped me achieve my position as I managed to pass people who were struggling. 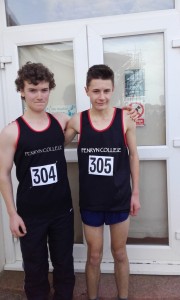 A few days later we both heard that we had been selected along with another 8 runners to join the Cornwall Team in the South West Championship in Cheltenham. The conditions of this race were horrendous and definitely the worst I have ever run in. The day started at 6am getting on the coach in Fraddon for a 4-hour journey to Cheltenham. We ran 2nd to last out of all the races, making the ground very very very muddy! The highlight of my day was getting in the shower afterwards to get warm and clean. I finished 34th which was in the top half of the South West, and Floyd finished a few places behind me. I managed to retain my Cornwall position of 6th place, whilst the Intermediate Boys came 2nd overall in the South West, losing out to Wiltshire.

The final stage was last week, when I was lucky enough to be selected again to join the Cornwall Schools team at the English Schools Cross Country Championship in Nottingham. Although Floyd did qualify he was unable to attend due to the Ten Tors training, meaning that I was the only Penryn College runner and when the team photos were being taken I took a selfie!! As the race was in Nottingham we had to leave the day before. It was a 7-hour journey and I got to stay overnight in a hotel. The conditions of the course were 100% better than at Cheltenham and it actually stopped raining. In the race there were 335 runners from all over England, 8 from each county. I was pleased to come in 157th place (within the top 50%) and I also managed to improve my Cornwall position coming in 5th place. The team overall came 12th which was the best-placed team in Cornwall.

After an Autumn term focus on climbing techniques, this term's Expedition Club focus is on navigation and orienteering, which will provide pupils with skills to plan for an expedition into the British mountains! (1/2)

Anders picked up gold in the 200m and 50m freestyle, silver in the 50m butterfly, and bronze in the individual medley and 200m backstroke! 😊

📝 We are looking to appoint a Headteacher, a Teacher of Girls PE and Lifeskills, Teaching Assistants, a Receptionist & Office Administrator, and *Exam Invigilators.

You can find out more information on these vacancies here: http://bit.ly/3fSDZRc. (1/2)

We've had a great start to the week, and there's lots to look forward to, including tomorrow's Year 7 Subject Review Evening, our Carrick Dance workshops, and more!

Have a lovely week! 😊