‘What a great bunch of thoughtful, active, committed students’

Our Press Officer was invited to sit in on debate at the latest School Council meeting.

It has to be said we’re very lucky to have such a great bunch of thoughtful, active, committed students!  Chair of the School Council this year is Amy Cocksedge (Arwenack, Year 11), Vice Chair is Lottie Spillar (Killigrew, Year 9), and Daisy Chapman-Gardner (Arwenack, Year 10) is Secretary. There are five or six representatives from each House, Arwenack, Gluvius, Killigrew and Pendennis. The Council have just elected seven new councillors from Year 7 and are looking forward to their enthusiastic contributions. They meet each half term and are working on a number of projects in school, supported by dedicated teacher, Mrs Liz Westhead, who ensures the Student Council runs successfully and democratically. 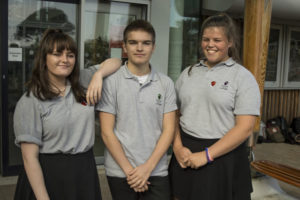 The Council and the Student Voice Prefects are collaborating together this year to talk to all students and ask for  ideas and opinions on important issues and decisions at school. Currently, they are working with Mrs Schouten, Deputy Headteacher to consider ideas about school uniform, particularly blazers, ties, and knit jumpers.

The Parents’ Forum have donated funds for play equipment for students to use at break and lunchtime, and the Council are recommending how this money should be spent to benefit as many students as possible.  At the Council’s next meeting in November, they will discuss how seating inside and outside school could be improved.

The Council collect suggestions and ideas by visiting tutor groups and also have a suggestion box on the Student Services Desk.

Last year, students nominated a wide range of charities which they felt passionate about supporting, and all students were given the opportunity to vote for the one they would most like Penryn College to support this year.

Stanley’s Friends is a local charity dedicated to supporting the needs of Stanley Barnes who, at 17 months, was diagnosed with a terminal and debilitating disease. Sanfilippo type A is an incredibly rare disease with no cure which affects the cells in the brain and nervous system. As cells die, Stanley will lose the ability to do many things he would have learned: reading, writing, and in the later stages, speaking and eating. Stanley’s friends aim to support him and his family to ensure he has the most joyous life possible between his fortnightly trips to Great Ormond Street. Sadly, the drug trial that Stanley was being treated with has been discontinued in the UK and as a result, his family will have to seek medical treatment abroad. 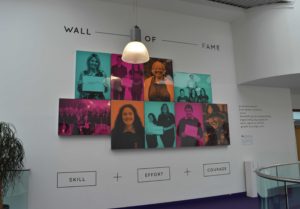 Do you know someone who deserves to be on our Wall of Fame?

Amy Cocksedge, Chair, said, “This charity was chosen by the students  and we hope to raise as much as we can to make a real difference to one little boy’s life through events such as Charity Week which will be coming up in December.”

The Charity Prefects have already come up with some amazing ideas for Charity Week this term, and would really welcome any other fun and creative ways to raise money for Stanley’s Friends this year.

The School Council organises the nominations and selection of the individuals celebrated on our Wall of Fame.  The Wall of Fame celebrates achievements of anyone in the school community: students, teachers, support staff, parents and community members.  Achievement is defined as an act that requires great courage, skill, or effort.  Last year’s winners have shown one or all of these qualities, which is why they were nominated and chosen by Penryn College students:

Now we are ready to create our third Wall of Fame! The School Council are really keen to hear from anyone who wants to nominate someone who is deserving of recognition for showing great skill, effort or courage (or all three!).  Nomination forms can be collected and returned to the box at the top of the stairs, opposite the library and the deadline is 30th November, 2016.

Check out the reports in our Sports Round-Up! ⬇️ https://penryn-college.cornwall.sch.uk/sports-round-up-21-27-november/