Members of the Penryn and Redruth community celebrated the lives and legacies of two sporting legends on Thursday evening, as the inaugural Terry Pryor & Benji Thomas Rugby Festival took place at Penryn College.

Students from all year groups faced Redruth School in a fantastic, competitive set of fixtures, played in memory of Dave ‘Benji’ Thomas and Terry Pryor – two inspiring figures in education and sport at Penryn College and Redruth School, respectively.

Following the matches, which saw six teams from each school compete against each other, it was Redruth who lifted the Terry Pryor & Benji Thomas Cup for the first time, after registering the most victories.

Additionally, one player from each team was selected for the Emerging Player Award, recognising the fantastic spirit in which they competed and their efforts throughout their respective matches. Below, you will find a list of the award winners.

A big thank you to everyone who came along to support the event, to Redruth School for working with us in organising the festival, and a big well done to all of the students who took part. 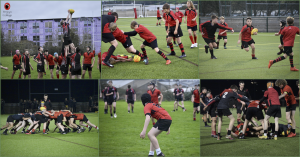