Both current and former students were rewarded for their fantastic efforts, and the celebrations began with the Mid-Term Achievement Management Awards on Tuesday 7 November. 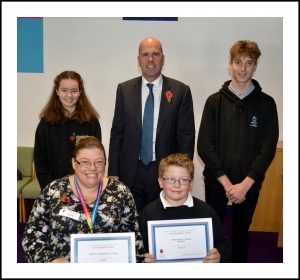 The Achievement Management system rewards pupils for going above and beyond – both academically and for various other personal achievements – and the following students registered the highest points total from each respective year group: Cameron and Polly (Year 7), Reven and Amelia (Year 8), Ali, Mariam, and Summer (Year 9), Maddy and Jamie (Year 10), and Ryan and Daisy (Year 11).

Continuing the month’s award handouts, the Class of 2018 returned for the Year 11 Presentation Evening on Tuesday 20 November. The ceremony was hosted by Class of 2018 Head Girl, Lauren Rowe, and Deputy Head Boy, Guy Brooks, with former students receiving a host of awards for their achievements over the past five years. 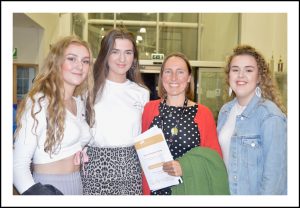 Celebration: Class of 2018 students returned to celebrate their achievements.

Concluding November’s flurry of celebrations, the Achievement Awards took place on the evening of Tuesday 27 November, with current students rewarded for their hard work over the school term.

Tutor Awards and Head of House Awards were received by students as a congratulations for their success, followed by an announcement of the Year 9 pupils who made their way onto the John Evans Progress Prize Pathway list.

The winner of the John Evans Progress Prize will be awarded to the student who has progressed best over the course of the academic year, and is set to be announced in September 2019.

All of the teachers and staff would like to send their congratulations to all current and former students for their fantastic achievements.

A reminder that our rescheduled Parents' Forum meeting will take place tomorrow (Thursday 26 January), 5.00pm - 5.45pm. The theme will be reading and wellbeing. 📚 (1/2)

📚 It was fantastic to see so many parents/carers and students at last night's Year 7 Subject Review Evening! 😊

We enjoyed another set of entertaining sports fixtures last week! 🏑

Check out the reports in our Sports Round-Up! ⬇️https://penryn-college.cornwall.sch.uk/sports-round-up-16-22-january-3/