One step closer to the National Final – Jake Ash reports

Having already overcome difficult away games in earlier rounds against Helston, Liskeard, Devonport and Ivybridge, Penryn were pleased to enjoy the relative comfort of their home Astro Turf. However, this was tempered by horrible conditions and a howling wind which would have a big impact on the flow of the game.

Despite playing against the strong wind, Penryn enjoyed the best of an expectantly scrappy first half. Scott McElwee came close to opening the scoring, firing a low shot across the goal which rebounded agonisingly away off the post. But the home side did get their reward for their pressure just before half time when the lively Kian Thomas opened the scoring with a left footed shot which found the corner of the net. 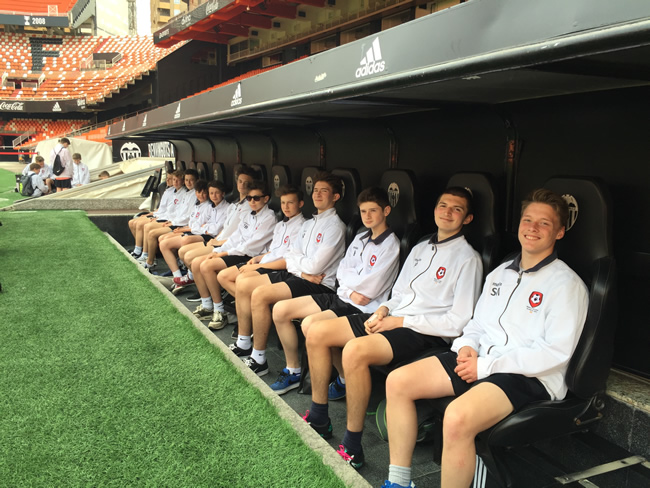 The team in much warmer weather!

It was a deserved reward for their efforts against an ever increasing wind which allowed Torquay some territorial pressure before the half time whistle. Despite this, Penryn’s back four stood firm, expertly marshalled by Dale Bowden and Lucas Potts and the hosts held on to their slender lead at half time.

The second half started in much more benign conditions and this meant that the game wasn’t as dictated by the weather. This opened the game out and both teams enjoyed chances to add to the score line, and it was Penryn who got the vital second goal. Toby Webb went on a mazy run across the midfield and was fouled on the edge of the box before he could get his shot away. The following free kick was fired low and parried into the path of the hard working Webb who cleverly flicked the ball into the roof of the net.

Despite some late pressure, Penryn looked relatively comfortable and sealed victory in the dying minutes when Thomas doubled his tally with a clever lob over the onrushing goalkeeper following a sharp counter attack.

The final minutes were seen out before the final whistle was met with excited celebrations. The team had matched the Schools’ previous best run in the prestigious competition, and are in to the last remaining 16 of over 550 schools who entered. They will now face Hounsdown School (Southampton) in Round 7, attempting to secure a place in the Quarter Finals.