Penryn College is delighted to officially announce its 2022/23 training and mentorship-based partnership with professional rugby club the Cornish Pirates.

Since September, as part of the partnership, Penryn College’s pupils have taken part in detailed training sessions led by members of the Pirates’ first-team squad, as well as player-student mentoring sessions, which focus on the importance of school, sporting advice, and much more.

The agreement also sees the Pirates make use of the school’s state-of-the-art synthetic turf pitch, where the first-team squad train once a week.

Indeed, the Penryn College-Cornish Pirates partnership began to develop during the 2021/22 academic year, when the RFU Championship side trained on Penryn College’s synthetic turf pitch ahead of a crucial league fixture.

Pirates’ players and staff subsequently noted how they enjoyed using the facility, and were impressed with the school’s vision for its students – building the foundations for the training and mentorship-based collaboration.

Commenting on the partnership and what it has delivered so far, Penryn College Director of Lifestyle and Community, Mr Tucker, said: “Our students are benefitting hugely from this partnership – not only from the training sessions, where they learn about the details of the game from professional sportspeople, but also from the mentoring sessions.

“They [the players] are superb role models, and their values of being good people first align with ours as a PE & Lifestyle department.”

And Pirates’ Joint Head Coach, Gavin Cattle, also reflected on the various elements of the partnership, noting mentorship as a key aspect. He said: “Obviously, we give them [the students] feedback and rugby advice, but I think it’s way bigger than that – it’s giving kids confidence, telling them how important school is. It’s bigger than rugby – it’s more the life aspect.

“Some of our players would have learned some harsh lessons from maybe not doing their best at school, then you’ve got other boys who have excelled and got university degrees and master’s degrees, and some who have gone into the working world and come back to rugby. So, it’s more what we can give back and make a difference that way.

“If you’re influencing one or two kids it has a knock-on effect, and the boys [the players] like that aspect,” he added.

And former Pirates captain, Cattle, also commented on the benefits of the club being able to use the school’s pitch on a weekly basis.

“Last year, we spent a long time [looking for a synthetic turf pitch], which takes your focus a little bit away from what you want to do on the weekend, so it’s been fantastic to have some stability in our programme,” said Cattle.

“The facilities are great, and the school has been really accommodating,” he concluded.

We would like to thank the Cornish Pirates for working with us, and look forward to continuing the training and mentorship-based partnership throughout this academic year. 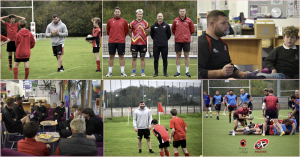