Home / News / We believe school sports doesn’t get any better anywhere in the south-west!

We believe school sports doesn’t get any better anywhere in the south-west!

It’s hard to believe, but Penryn College is even more sports-mad than ever!  There have been huge increases in children taking part in its holiday and Saturday sports programmes, and impressive competition success this year. Now students on its Sports Leadership Programme are organising lunchtime activities to encourage all students to get sporty.

Football, netball, badminton, basketball and table tennis are on offer this term. Student Sports Leaders are running activities and House Leagues with support and training from expert coaches and PE staff. The programme creates leadership opportunities for teenagers who can inspire other pupils to get fit and enjoy sport.

Kate Blackburn, head of PE, said, ‘We have some brilliant natural leaders whose sporting enthusiasm is really catching. They are also great role models for our younger pupils and for the children in our primary partner schools.’

Student Sports Leader Ben Phillips said, ‘ Sports at lunchtime is a great idea – we need it as a break from lessons.  I hope to get other kids coming to after-school clubs too.’ 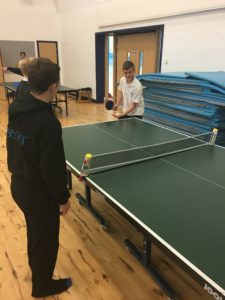 This year Penryn College has seen dramatic improvement in the performance of its sports teams and individuals, many of whom have achieved success at county and national levels.  Most recently, Luke Jephcott, now a Plymouth Argyle U18 footballer and has just left the school, is a shining example.  Luke was part of the Penryn Football Development Centre which is run by the school to provide talented primary-aged footballers with weekly high quality coaching.  Luke attended the Development Centre for three years before joining Penryn College where he continued to receive further coaching of his skills.  He won a National District competition for West Cornwall date and set him on a successful sporting career path.

The pathway to sporting excellence has been carefully developed by the PE staff. They have created a strong coaching culture; older students regularly coach younger pupils from its primary partner schools, organising sports challenges and events as well as committing to regular club sessions.  Year 10 pupil Sidney Stuart, an impressive sporting all-rounder, gives up every Saturday morning to help deliver football coaching to the ever-enthusiastic 3-5 year old groups.  Mr Ash is certainly impressed: “Sidney has become not only a great coach, but the boys and girls really look up to him as a role model. His social and communication skills have really flourished, alongside his coaching ability.”

This summer the success of GB’s athletes, particularly those based in the South West, in the 2016 Rio Olympics has been an additional inspiration to many students. Penryn College’s Deputy Head, Paul Walker believes it is the ‘best in the south west’ in its school sports delivery and, with their students’ current track record, the college has every confidence that one or more will be elite athletes competing for their country in a future Olympic Games!