November 23rd: An evening of celebration and best wishes for future success for our former students 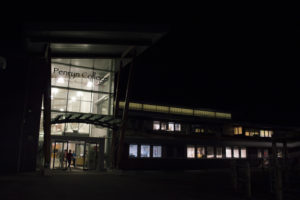 The scene is set for a special evening!

Students, teachers and parents were all reunited last Wednesday to celebrate five years of study, teamwork and friendship. The class of 2016, who last crossed the college threshold to collect their exam results envelopes, returned in a more relaxed manner to catch up with staff and see old school friends.

At the invitation of Marie Hunter, parents and students attended a drinks reception. Ceremonies were hosted by former Head Girl and Head Boy, Hannah Barlow and Bertie Duncan.  Ms Hunter welcomed the students who are now happily pursuing college courses and apprenticeships.  They were, she said, ‘an incredibly special group of people’, and ‘an inspirational year group’, having achieved the best GCSE results in the college’s history. 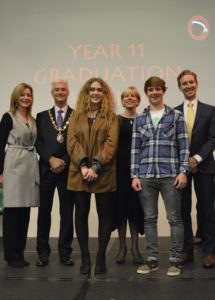 Guest speaker for the evening was Professor Geoff Smith, Deputy Vice-Chancellor of Falmouth University, well-known composer, music artist, and founder of the Bath School of Music and Performing Arts. He commended them as a generation with the talent, curiosity and creativity to tackle the complex challenges of our society. He quoted Dawn French, whose message to graduating university students he felt applied perfectly to this audience: ‘It is your right and duty to enjoy your lives!’ 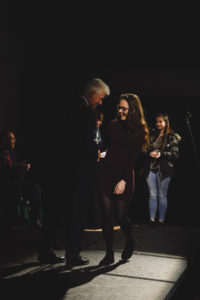 Emma receives congratulations from the Mayor of Penryn

The Mayor of Penryn, Councillor Mark Snowdon, was warmly welcomed, and with Professor Smith, congratulated every student for their achievements as they took to the stage.  The appreciative audience of parents and students applauded certificate winners and enjoyed videos capturing the school years of the class of 2016. 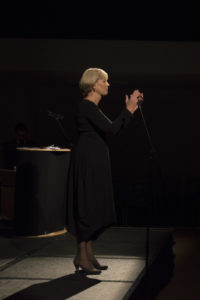 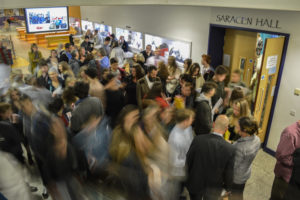 The place was buzzing – thank you to Laura Richardson for her photos of the evening!

Marie Hunter was presented with flowers by the Head Boy and Girl who expressed gratitude on behalf of all the students for their headteacher’s support and commitment to their individual success throughout their time at Penryn College.