Penryn College organised a special celebratory evening for the previous Year 11 cohort and their parents last week.  For many it was the first time they had returned to Penryn College since results day and they were delighted to see their former peers and teachers again.  As well as collecting GCSE certificates other awards were also handed out to recognise, and celebrate, their achievements.  Notable successes included Floyd Ratcliffe, Lauren, Ethan and Kirsten McKeown for Academic Excellence, gaining 13 or 14 A’s or A*’s each.  The Headteachers award for all round accomplishment was awarded to Casey for her determination to succeed.  Mr Walker, Headteacher, said “It is wonderful to see someone work so hard for so long and then make such superb progress. Casey is positive proof that if you work hard enough you can achieve anything you want. We are so proud of you”

The Special Guest during the evening was Councillor Shelley Peters, Mayor of Penryn, and Lily Peters, Mayoress.  Also in attendance as the guest speaker for the night was Professor Alan Murray, Deputy Vice Chancellor Academic, from Falmouth University.  Professor Murray gave a highly impressive and motivational speech detailing his experiences within his career.

The evening drew to a close to final words given by Mrs Hunter.  Speaking to the last year group under her headship she said “It is really important to celebrate your successes, to remember all the hard work you gave to your GCSE’s and the friendships you made along the way during your five years at the College. I am incredibly proud of you all.

Mr Walker’s closing message was clear to the audience “make the most of every opportunity available to you.  Keep in touch as you will always be part of the Penryn College Family” 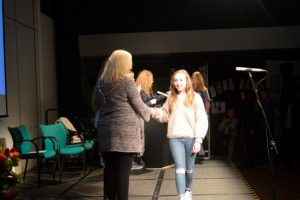 Jaz being congratulated by the Mayor 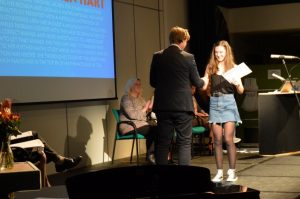 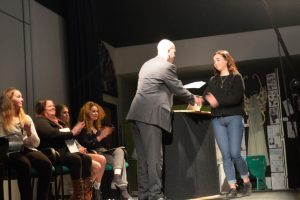 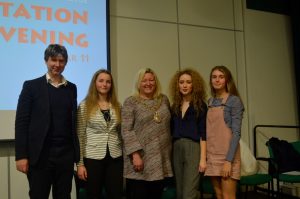