Young Carer Awareness Day is a yearly event which recognises 700,000 incredible young carers. While showing support for these amazing young people, the day also raises awareness of the unique challenges they face while growing up.

On the 26th of January young carers from Penryn College joined Cornish artist Cosmic for a workshop based on this year’s YCAD theme: “When I grow up”. The theme was chosen to highlight how difficult it can be for young carers to realise their hopes and dreams for the future without the right support.

It’s all about helping young carers achieve their dream career. Sarah from Kernow Young Carers provides that support and more for young carers in Cornwall. KYC is an Action For Children project working with young people in a caring role.

“We meet on the first Thursday of every month and have lots of discussions. We make plans to do things like bowling and laser tag. We also talk about mental health.” – Hayley, Year 8

Through group and one to one sessions Kernow Young Carers gives children like Hayley a varied support network including other carers close to their own age. This help is invaluable, allowing them to share experiences and support one another.

Sarah joined Cosmic and the kids in The Hub at on campus and explained that the day was “to celebrate all the great things you guys do” and help encourage them to not only think about, but believe in their dreams and aspirations.

Some of the carers already had firm ideas about their futures. Alex was first to share his ideal career – “Palaeontology”! Hayley also wants to go down the science path to become an engineer. We were later joined by Joe (who couldn’t miss food-tech, they were making pizza after all) who wants to be a teacher. 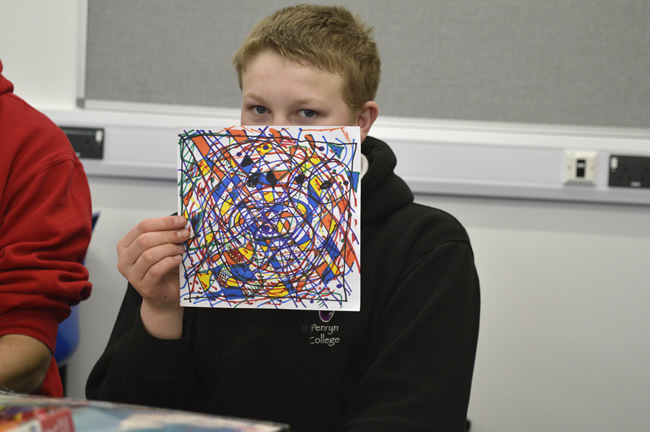 Will shows off one of the warm-up pieces.

Cosmic began the session with an artistic warm-up. After some deep, relaxing breathes everyone was given “Things to make marks on” and “Things to make marks with”. The relaxed breathing continued as marks were made, shapes and scribbles rolling onto the paper in the way each person felt it should. “Pass it on” said Cosmic, and the “Things” were passed over to the next person who continued to add marks. This process was repeated several times and the end results were a kaleidoscope of collaboration! It was “as if they were by the same artist”.

Minds artistically-primed and at the ready, it was time to start thinking about the blank canvas in the room and what would eventually cover it. “Spray-paint!” was eagerly suggested by Alex whose eagle eyes had spotted some amongst Cosmic’s array of materials. This would be an exciting new experience for them all. 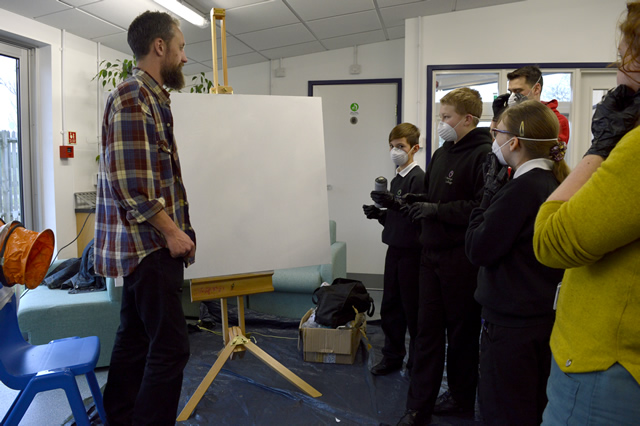 Decisions, decisions, what will they create?!

After a tutorial on how to use the paints safely Cosmic began the discussion of what this piece of art was going to be. What would symbolise their future dreams? How could they represent them using the materials at hand? Some wonderful suggestions started flying around the room: The sun-rising, clouds, a tree of life. The young carers were full of strong ideas and opinions. In the end they chose to use words to represent their future aspirations: 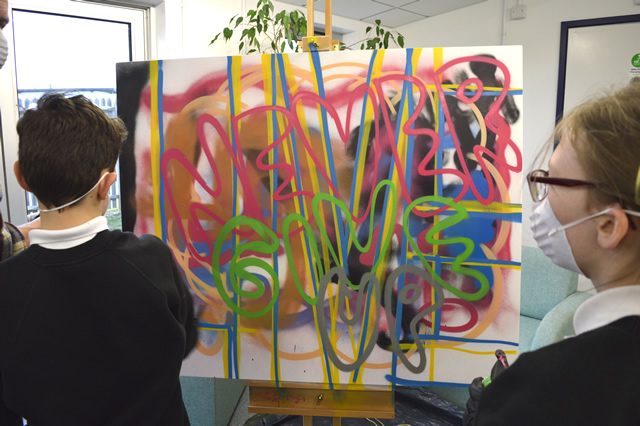 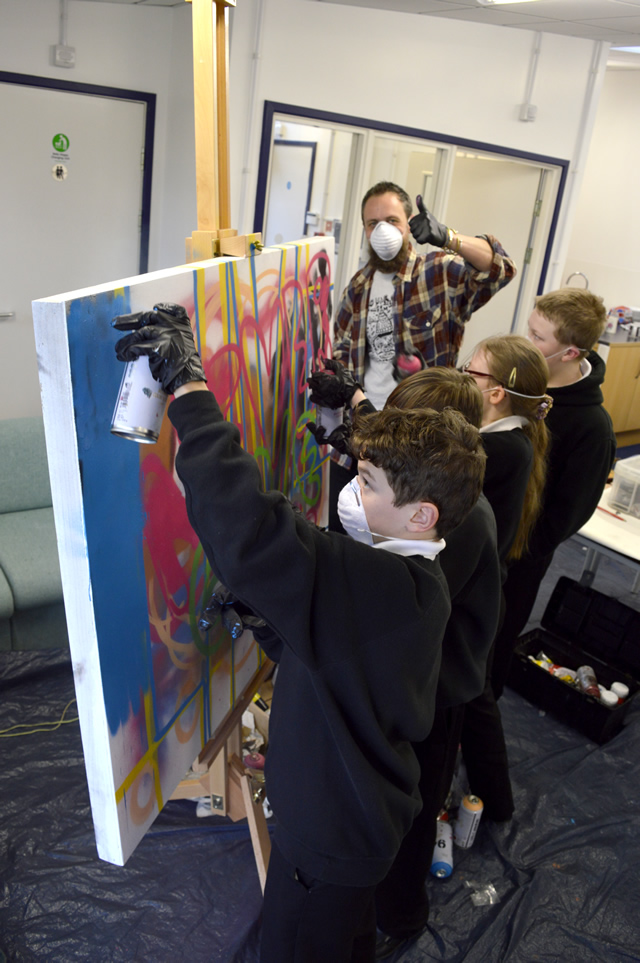 The young carers use different spray techniques to add colour! 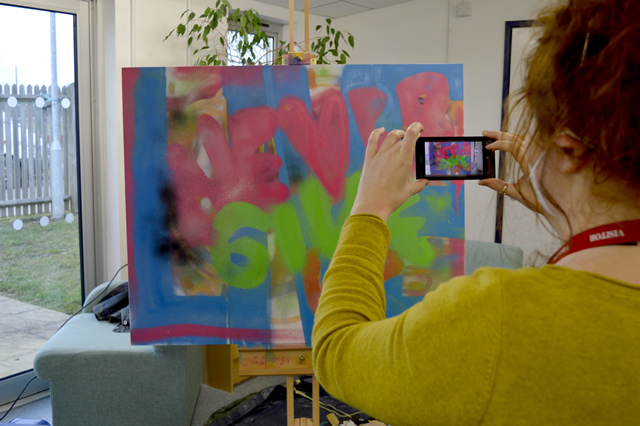 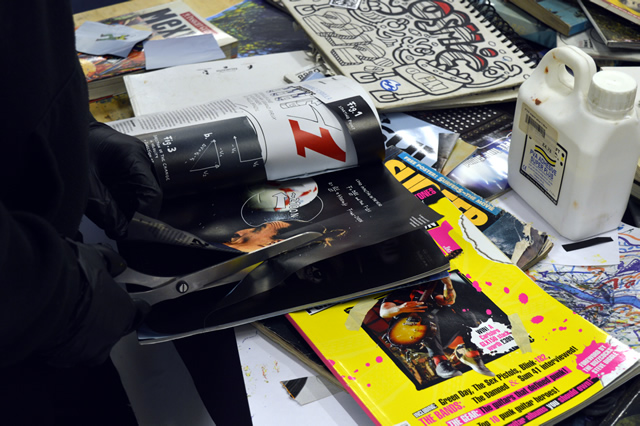 Time for some mixed media! The search for “Big people” who have done really well in life or achieved something great began. 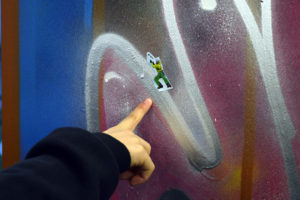 Inspiration to stay ambitious – some finishing touches are added. 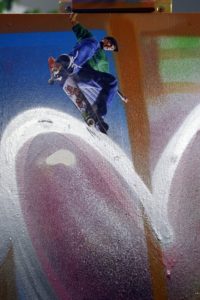 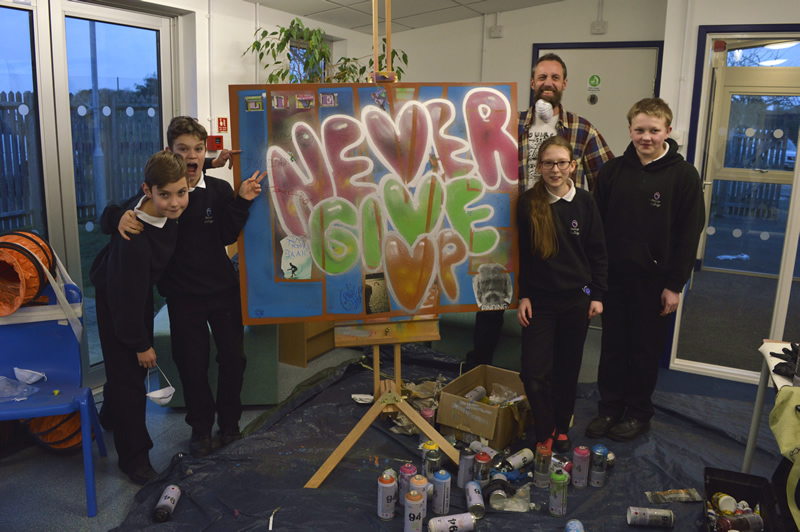 The awesome final result and it’s creators! Can you spot the hidden message?

Clearly there’s no stopping these young carers, and their inspirational work will be proudly displayed in the school for all to see.

We would like to say a big thanks to Sarah and Kernow Young Carers for organising this event, and Cosmic for his creative influence. A big hand must also go to Alex, Joe, Hayley and Will who have made something really special that will motivate the whole school for years to come.